Microsoft to acquire Activision Blizzard to bring the joy and community of gaming to everyone, across every device

and , /PRNewswire/ -- With three billion people actively playing games today, and fueled by a new generation steeped in the joys of interactive entertainment, gaming is now the largest and fastest-growing form of entertainment. Today, (Nasdaq: MSFT) announced plans to acquire (Nasdaq: ATVI), a leader in game development and interactive entertainment content publisher. This acquisition will accelerate the growth in 's gaming business across mobile, PC, console and cloud and will provide building blocks for the metaverse. 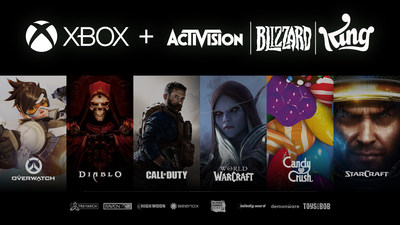 will acquire for per share, in an all-cash transaction valued at , inclusive of net cash. When the transaction closes, will become the world's third-largest gaming company by revenue, behind Tencent and Sony. The planned acquisition includes iconic franchises from the and King studios like "Warcraft," "," "Overwatch," "Call of Duty" and "," in addition to global eSports activities through Major . The company has studios around the word with nearly 10,000 employees.

will continue to serve as CEO of , and he and his team will maintain their focus on driving efforts to further strengthen the company's culture and accelerate business growth. Once the deal closes, the business will report to , CEO, Gaming.

"Gaming is the most dynamic and exciting category in entertainment across all platforms today and will play a key role in the development of metaverse platforms," said , chairman and CEO, . "We're investing deeply in world-class content, community and the cloud to usher in a new era of gaming that puts players and creators first and makes gaming safe, inclusive and accessible to all."

"Players everywhere love games, and we believe the creative teams have their best work in front of them," said , CEO, Gaming. "Together we will build a future where people can play the games they want, virtually anywhere they want."

"For more than 30 years our incredibly talented teams have created some of the most successful games," said , CEO, . "The combination of world-class talent and extraordinary franchises with 's technology, distribution, access to talent, ambitious vision and shared commitment to gaming and inclusion will help ensure our continued success in an increasingly competitive industry."

Mobile is the largest segment in gaming, with nearly 95% of all players globally enjoying games on mobile. Through great teams and great technology, and will empower players to enjoy the most-immersive franchises, like "Halo" and "Warcraft," virtually anywhere they want. And with games like "," Activision Blizzard´s mobile business represents a significant presence and opportunity for in this fast-growing segment.

The acquisition also bolsters portfolio with plans to launch games into , which has reached a new milestone of over 25 million subscribers. With nearly 400 million monthly active players in 190 countries and franchises, this acquisition will make one of the most compelling and diverse lineups of gaming content in the industry. Upon close, will have 30 internal game development studios, along with additional publishing and esports production capabilities.

The transaction is subject to customary closing conditions and completion of regulatory review and shareholder approval. The deal is expected to close in fiscal year 2023 and will be accretive to non-GAAP earnings per share upon close. The transaction has been approved by the boards of directors of both and .

Chairman and CEO ; , CEO, ; CEO, Gaming, ; and Chief Financial Officer will host a webcast for investors and media on , at / regarding this transaction.

There will be a recording of the conference call available shortly after the call until , at . To access that recording:

About
(Nasdaq "MSFT" @microsoft) enables digital transformation for the era of an intelligent cloud and an intelligent edge. Its mission is to empower every person and every organization on the planet to achieve more.

About
Our mission, to connect and engage the world through epic entertainment has never been more important. Through communities rooted in our video game franchises we enable hundreds of millions of people to experience joy, thrill and achievement. We enable social connections through the lens of fun, and we foster purpose and meaning through competitive gaming. Video games, unlike any other social or entertainment media, have the ability to break down barriers that can inhibit tolerance and understanding. Celebrating differences is at the core of our culture and ensures we can create games for players of diverse backgrounds in the 190 countries our games are played.

As a member of the Fortune 500 and as a component company of the S&P 500, we have an extraordinary track record of delivering superior shareholder returns for over 30 years. Our sustained success has enabled the company to support corporate social responsibility initiatives that are directly tied to our franchises. As an example, our Call of Duty Endowment has helped find employment for over 90,000 veterans.

Learn more information about and how we connect and engage the world through epic entertainment on the company´s website, www.activisionblizzard.com

This presentation contains certain forward-looking statements within the meaning of the "safe harbor" provisions of the United States Private Securities Litigation Reform Act of 1995 with respect to the proposed transaction and business combination between and , including statements regarding the benefits of the transaction, the anticipated timing of the transaction and the products and markets of each company. These forward-looking statements generally are identified by the words "believe," "project," "predicts," "budget," "forecast," "continue," "expect," "anticipate," "estimate," "intend," "strategy," "future," "opportunity," "plan," "may," "could," "should," "will," "would," "will be," "will continue," "will likely result," and similar expressions (or the negative versions of such words or expressions). Forward-looking statements are predictions, projections and other statements about future events that are based on current expectations and assumptions and, as a result, are subject to risks and uncertainties. Many factors could cause actual future events to differ materially from the forward-looking statements in this presentation, including but not limited to: (i) the risk that the transaction may not be completed in a timely manner or at all, which may adversely affect business and the price of the common stock of , (ii) the failure to satisfy the conditions to the consummation of the transaction, including the adoption of the merger agreement by the stockholders of and the receipt of certain governmental and regulatory approvals, (iii) the occurrence of any event, change or other circumstance that could give rise to the termination of the merger agreement, (iv) the effect of the announcement or pendency of the transaction on business relationships, operating results, and business generally, (v) risks that the proposed transaction disrupts current plans and operations of or and potential difficulties in employee retention as a result of the transaction, (vi) risks related to diverting management's attention from ongoing business operations, (vii) the outcome of any legal proceedings that may be instituted against or against related to the merger agreement or the transaction, (viii) the ability of to successfully integrate operations, product lines, and technology, and (ix) the ability of to implement its plans, forecasts, and other expectations with respect to business after the completion of the proposed merger and realize additional opportunities for growth and innovation. In addition, please refer to the documents that and file with the on Forms 10-K, 10-Q and 8-K. These filings identify and address other important risks and uncertainties that could cause events and results to differ materially from those contained in the forward-looking statements set forth in this press release. Forward-looking statements speak only as of the date they are made. Readers are cautioned not to put undue reliance on forward-looking statements, and and assume no obligation and do not intend to update or revise these forward-looking statements, whether as a result of new information, future events, or otherwise.

Additional information and where to find it

and certain of its directors and executive officers and other members of management and employees may be deemed to be participants in the solicitation of proxies from stockholders with respect to the transaction. Information about directors and executive officers and their ownership of common stock is set forth in proxy statement on Schedule 14A filed with the on . To the extent that holdings of securities have changed since the amounts printed in proxy statement, such changes have been or will be reflected on Statements of Change in Ownership on Form 4 filed with the . Information regarding the identity of the participants, and their direct or indirect interests in the transaction, by security holdings or otherwise, will be set forth in the proxy statement and other materials to be filed with in connection with the transaction.